Recently I’ve played a few amusing games on facebook and via e-mail where you fill in some sort of form with either random questions about yourself, or you ‘google’ you name and fill out funny ends of sentences, or you shuffle your music in iTunes and randomly assign the each song that comes up to a part of your life, as if it were your life’s soundtrack.

This last game proved to be quite funny and surprising.

For example, my Opening Credits would be “Little Boxes” by Melvina Reynolds, and if you’ve been awake in the last 3 years you’d know this is the theme song for the TV show “Weeds”. No, my life has nothing to do with the plot of Weeds, but the theme song seems appropriate.

A few other funny coincidences were as follows:
Falling in Love: We are Broken – Paramore
Prom: Hell – Squirrel Nut Zippers
Life: Me Against the World – Simple Plan
Final Battle: I Get Knocked Down – Chumbawumba

Now, this really doesn’t predict anything true about my life, it’s just a fun game to play to see what comes up.

However, of all the thousands of music tracks I have in my iTunes folders, and of all the CDs I’ve made or playlists created, I do have a few favourite bands that I seem to turn to when I’m sick of the radio with Top 40 hits, or popular songs from the 80s and 90s, or even from our local stations that play new artists. These comforting favourite bands keep putting out new albums that continue to speak to me in a way music should, deep down to the depths of my fears, my sadness but also my joys.

Here are my Top 4 all time favourite artists/bands, in no order:

Coldplay – I’ve loved them ever since I was introduced to the song “Yellow” BEFORE it was ever played on the radio. I had a friend who always followed new British bands and found these guys long before Yellow was overplayed. He sent me a link to their website and back then, I remember instantly connecting to their haunting melodies and different, interesting sound. The lyrics, too, to every song on their Parachutes album, spoke to me. Every song on that album tugs at my emotions when one is played. I can even pinpoint the memory of where I was when I first heard them. Now after several albums, their newest venture Viva la Vida or Death and All His Friends again amazes me with the risks they take and conquer. I cannot wait for their next new and fresh sound.

Snow Patrol – I first heard one of their songs on the popular show Grey’s Anatomy…many of you will remember the season finale where one of the characters has to deal with the death of a loved one, and the song that wove it’s way into that tearful moment. After the show that night, I quickly looked up the songs used in the episode and found Snow Patrol’s “Chasing Cars”. After finding their albums, I was glued to the sounds they created and I studies their lyrics, eager to know what they were all about. Their first two albums, Final Straw and Eyes Open both breathed new life into my music lists. I listened to them until I knew every song from the first few notes. And now their newest album, A Hundred Million Suns, has me adding them to my list of new CDs to make to listen in my car. (I do have an iPod input, but my driving trips are so short, it’s not worth the effort to plug it all in unless I’m driving longer distances. CDs are still my preferred choice of medium for car listening, along with satellite and local radio.) 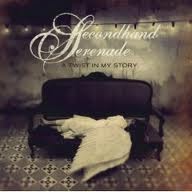 Secondhand Serenade – Along with my new car last year, I signed up for satellite radio and quickly bookmarked a few good stations. One played the most voted on Top 20 songs, constantly changing after listeners call in to vote for their favourites. I soon heard a new song “Fall for You” and I mentally noted it to look up later. I then found Secondhand Serenade, not a band but the solo project by John Vesely, so he could either play alone or with any number of band members. His two albums were quickly added to my playlists and became instant favourites…every single song. I also love the concept of his work, he writes and sings his music for his wife, where they are the firsthand serenade, then for us, his fans they are the secondhand serenade. Many of his songs I would consider true background music for the real soundtrack of my life. Songs like “Half Alive”, “Broken”, “Maybe”, “Why”, “Pretend” and “A Twist in My Story” will always be on my playlist.

The Fray – I have just become familiar with this band after liking what I’ve heard both on the radio and on TV shows where a few of their recent tracks have appeared. So far, their unique sound and the meaning behind their lyrics have caught my ear and kept me interested to hear more. I look forward to learning more about them. Oh and I love their video for “How to Save a Life”.

3 thoughts on “Music to My Life”