Firefly, the wild west space-smuggler outlaw epic sci-fi series has long been one of my most favourite worlds to revisit. Though this series made for TV only lasted a single season, love of the series brought it back to life with an equally awesome feature film called Serenity three years after Firefly’s cancellation.

Firefly and Serenity filled the gap for people like me who grew up with Star Trek, Battlestar Galactica, and the Star Wars movies with a bit of old west Bonanza and Little House on the Prairie (with guns and spaceships)  tossed in. A space drama that was witty, action-packed, but still a little gritty, Firefly felt like what our world could look like in a few hundred years. The characters felt like people we wanted to know more about, route for, and finally see them win a little though they were underdogs and outcasts.

I highly recommend the TV show Firefly and the movie Serenity. They are in my top five favourites!

And if you like Firefly, you are going to love these two sci-fi gems I’ve recently found!

“Browncoats” like me have been yearning for some show to fill the Firefly emptiness after no future plans came through to continue the series or film, but nothing has seemed to live up to the awesome world Joss Wheadon created.

However, two shows that began in my home nation of Canada have risen to the top of my sci-fi radar: Dark Matter and Killjoys.

I’ve been watching Dark Matter since it aired in 2015 and it just concluded it’s 2nd season. The premise has a crew of six on a small ship wake up with their memories wiped and proceed to figure out who they are and what happened to them, while dealing with people and circumstances from their past lives. They end up calling each other number One through Six, in the order they woke up on their ship and though being little more confusing to keep track of who was who with just numbers, I found that the numbersstuck like names after a few episodes.

The world of Dark Matter feels as real and as rich as the world of Firefly. The setting is deep space with rustic mining worlds and space stations with giant corporations owning and ruling everyone. There is also awesome new technology ideas with hints of cloning, space travel, telepathy, new weapons and fantastic androids. Mysteries pop up around every corner with the crew not knowing who knows them and who they know, who to trust and who to run from or fight.

The cast is an interesting mix from the serious leaders, to the gun-happy brute, to a teen computer hacker. Without giving too much away, the main characters now have to grapple with not only finding out who they were but who they now want to become. Do they want to slip back into their past ways when they don’t feel the same way about life? Will they keep their new-found sense of morality and fairness or will they seek to rediscover their past motivations?

Mostly, the crew quickly becomes a tightly-knit family, if a bit reluctantly from a few members, and they struggle through their new lives one situation at a time with remnants of who they used to be falling into their laps in awkward ways.

I’m super excited that Dark Matter has been renewed for a third season, airing in 2017!

This sci-fi series has been around since 2015 as well, but I’ve just discovered it after looking for any other similar show to Firefly and Dark Matter. It, too, has Canadian roots, ordered by our Space channel and then picked up and co-produced by the US Syfy channel and first airing in 2015. 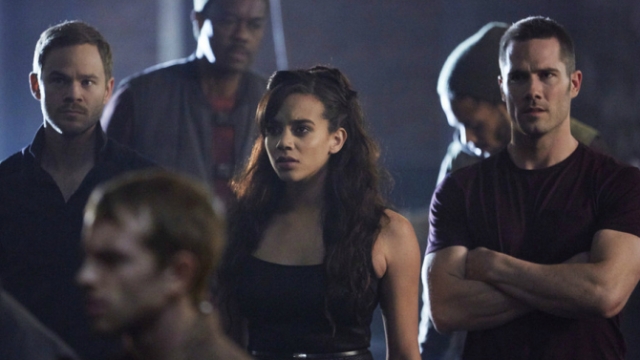 Killjoys follows a crew of three bounty hunters who live for the next warrant to apprehend people or property at any cost. It’s set in a 4-planet system in deep space know as the Quad, whose worlds are detailed and believable, from the scummy towns of the poor mining and hard-labour colonists to the beautifully lush and green planets of the rich 9 families who seem to be the main governing body.

The trio is quickly set up with bonds of friendship and family but each seem to have their own personal secrets and past that creep out to haunt or trip them up along the way. As Reclamation Apprehension Coalition, or RAC, agents they remain neural in all conflicts with no allegiance to anyone or any ruling party, but several of their missions mixed with their own pasts seem to force them to make hard decisions about who to trust.

The three main characters work well and balance each other.
“Dutch” is the main protagonist, a ruthless warrior woman who is more lethal than she looks, especially when undercover in fancy clothing. We quickly see snippets of her upbringing and how she received her brutal training. Her mysteries expand as we see more and more of who she used to be.
John is her former-thief partner and they work well together, getting their warrants efficiently with amazing witty quips along the way.
As the series opens, we meet the third cast member who joins the main duo and quickly learns the business but with troubles of his own past rearing up to cause them all to stumble along their way. (Plus it helps that he’s super pretty to look at!) 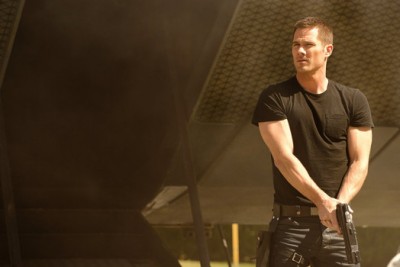 The Quad and the Killjoys’ world is fun, full of action, yet also ripe with mysteries and complex subplots moving ahead. I love the costumes, the weapons, the ships, the different and contrasting planets. It’s like Alias meets Firefly in a new way!

I’ve only watched the first season so far, the second is ready and waiting for me to enjoy as soon as I can find the time, and happily, Killjoys has been renewed for Season 3 airing next year.

I hope you try out these shows and find them as entertaining and complexly satisfying as I have!

Let me know what YOU think about these shows or tell me what are YOUR sci-fi favourites in a comment below.